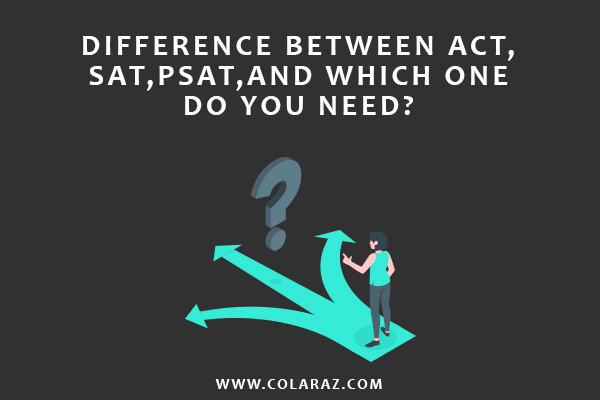 Difference Between ACT, SAT, PSAT, and Which One Do You Need?

Getting admission in the college after high school is a challenging yet effort-demanding task for most of the students. One needs to prepare and have a grip on various tests to secure a seat in a college of one’s choice. For this to happen in the United States, several options are available, including ACT, SAT, and PSAT tests. However, the real issue for the students is to decide which test to choose from the options. This issue is inevitable because all these three tests converge on some point or another.

While deciding to choose the best test option, the focus should be more on the key aspects related to it. These three tests are to assess the aptitude level of the students and then calculate an overall aggregate based on several factors. These test options differ in terms of the college preferences and a student’s future aims, to name a few.

Read more: 7 reasons why college students should land an intership

Before you decide to take any particular test among these, let’s discover what each test is about and how do they differ from each other!

Generally speaking, all these tests are there to check the aptitude level of students for being credible enough to enter a college. However, at some level, these tests differ from each other in terms of technicalities. Here is an overview of the most common college tests, namely ACT, SAT, and PSAT, as discusses below.

The test of ACT, also referred to as the American College Testing, has been designed to test the aptitude level of students for high school as well as college admissions. The test is conducted seven times annually and is widely accepted by colleges and universities in the USA. These tests give an idea to the college/university administrations whether or not a particular student is eligible for admission. After compiling test scores from the prospective students, a merit list is defined by comparing student’s scores against one another. Being a standardized level test, colleges can compare and decide which students to grant admission for the upcoming session.

A general overview of the main sections of ACT can be summarized as follows:

Apart from these mandatory sections, a student can also select Essay section, to comprehend his/her abilities. The scores for each section are ranked between 1 to 36. About the duration of ACT, it lasts for about 2 hours and 55 minutes. For those who chose the Essay portion as well, the time is extended to 3 hours and 55 minutes.

Read more: how to apply for a student loan for higher education?

The SAT test also referred to as the Scholastic Assessment Test, is used to identify the analytical as well as the aptitude level of the students. Previously referred to as the Scholastic Aptitude Test, it is another standardized test employed by universities and colleges across the United States. Similar to ACT, the SATis also conducted seven times a year. The test scores are compared and aggregate is formed, based on which students are granted or denied admission into the college/university.

Just like the ACT, SAT test has also been divided into, two categories as follows:

It also offers an optional Essay portion, which the student can choose to give a test. The test scores for the SAT have been categorized between 200 and 800 for each section. Hence, on a grand level, the student can score as low as 400 and as high as 1600 for the mandatory portions on the SAT. For the Essay portion, a student will be granted a separate score between 200 and 800. The duration of the SAT standardized test lasts for 3 hours. However, with the inclusion of the Essay portion, the time is extended to 3 hours and 50 minutes.

Contrary to SAT and ACT Test, PSAT is not a standardized test designed to comprehend the aptitude level of the students. Rather, it has been devised to allow the students to prepare either for SAT or ACT tests. The test is conducted for the students at High School Sophomore and Junior Year. The one and the most important benefit associated with the PSAT test is that it has been termed as the National Merit Scholarship Qualifying Test. Hence, scoring well on the PSAT test can straightaway grant a student with a scholarship for the college expenses.

For the PSAT test, the following two categories have been designated:

Unlike SAT and ACT, there is no optional Essay portion in the test. For a student to clear the test, he/she must score between 160 and 760 points for each section. And an overall test score must lie between 360 and 1520. The duration of the PSAT test lasts for 2 hours and 45 minutes. Lastly, this test is offered once a year, in October.

Key Difference between SAT and ACT

The main difference between SAT and ACT sections is the Science section in the ACT. Furthermore, the ACT focuses on putting up straightforward queries for the students. While the SAT questions rely more on the evident-based and contextual questions.

What Do Colleges Prefer?

Both SAT and ACT are standardized tests and all the colleges/universities countrywide accept both of them. Though there is a misconception about top-ranking colleges preferring SAT above the ACT, this speculation is more affected by the localities than the colleges/universities themselves. Harvard and Stanford’s graduates prefer SAT exams while the Chicago graduates favored ACT over SAT. As far as PSAT is concerned, the eligibility and other criteria are set forth by the high school administrations.

Related: What is the role of a mentor?

How to Decide which Test to Take?

For the students, taking on the PSAT test may turn out to be quite helpful, and one can win over a college scholarship as well. Both SAT and ACT tests differ in terms of sections and scorings. However, if a student attempts both of these tests once, he/she may decide better which test to choose. Moreover, one may score incredibly well on either of these tests and may secure a seat at one’s preferred college/university.