Back to All Blogs
Education

Literacy Rate in Pakistan as compared to Other Asian Countries

Education is a vital factor in human progress and a very fundamental right of each citizen. Education is deemed to have a robust connection with the economic and social development of a country. No state can attain sustainable economic growth without considerable investment in human resources. Correspondingly, the literacy rate is one of the vital indicators that gauge the level of education. Its enhancement has an extensive impact on other vital indicators of welfare.

Asia has been the cradle to numerous civilizations in the world. Unfortunately, it accumulates a widening range of illiterates now. There exists a huge disparity in the literacy levels of men and women. Asia being land to some of the biggest economies and developed countries, whereas including the underdeveloped countries in its boundaries as well, large differences can be seen in the literacy rate of different Asian countries. Pakistan, unfortunately, is amongst one of the most uneducated nations of Asia. Literacy rate of Pakistan which is 58.7 is even lesser than Bangladesh and Nepal, that have literacy rates of 61.5 and 64.7 per cent correspondingly. Sri Lanka and the Maldives have accomplished far more remarkable results considering that more than 90% of the population in both of these countries is knowledgeable. India exhibits 74% literacy rate, in spite of its massive population. 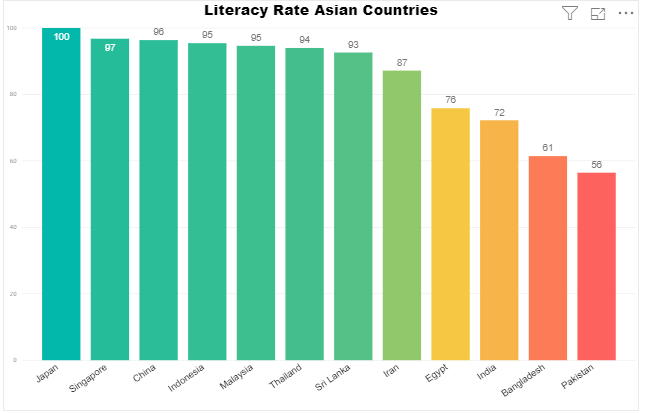 As the 21st-century origins, the education condition trials world leaders with its sheer burden of illiteracy in some countries and inadequate progress in ensuring betterment in adult literacy rate. The adult literacy rate is significant to improve unemployment and business conditions. Considering counterparts of other Asian countries such as Malaysia, Indonesia and Singapore, more than 90 per cent of its population is literate. Whereas, Pakistan displays a loathing figure of just 55 per cent of adult literates. This trend directly shows us that developed countries have a massive proportion of the adult literacy rate.

Another problem that hinders the progress of literacy is the amount spent by the government on the education sector. Asia is the most populous continent in the world having burgeoning populous countries, such as China, India, Pakistan and Indonesia make it a little difficult for the governments to share a chunk of the budget towards education. But in order to place the country towards development, education and literacy must be a priority. If we evaluate the expenditure on education by the percentage of GDP by country, regrettably, Pakistan ranks amongst the bottom-line that is 2.76%. whereas other developed and developing countries are allotting a substantial proportion towards the education sector. Even, war-torn Afghanistan has managed to contribute greater chunk of its GDP towards education. Afghanistan’s government expenditure by the percentage of GDP is 3.9%. India and Iran have allotted 3.8% of the GDP. Sri Lanka’s spending on education is somewhat nearer to Pakistan which is 2.8%. 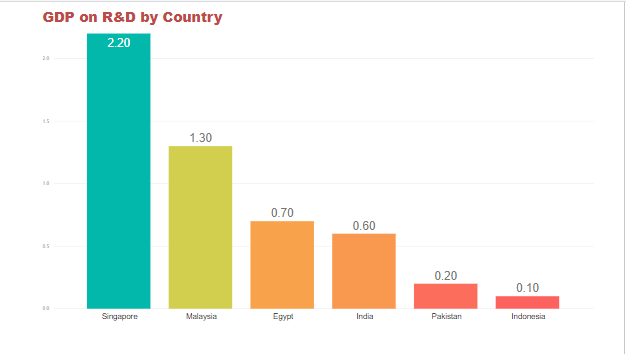 Pakistan has achieved much in terms of literacy but its progress is still much far behind its neighbours, especially Iran. Iran had considerably lower literacy rate than Pakistan in the 1950s but now it has marked a momentous figure near to 90%. Shah Reza Shah Pahlavi, the ruler of Iran from 1941 to 1979 kept education as a prime focus. The Shah devoted a weighty portion of his country’s oil profits to facilitate education, health care and infrastructure. 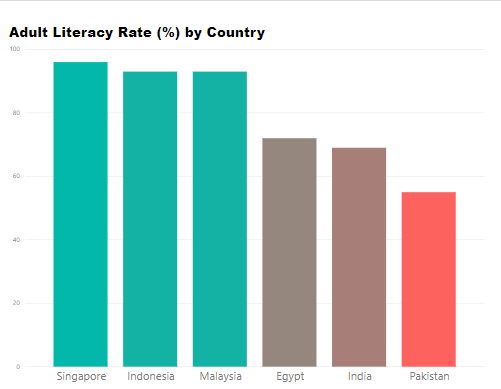 The Government should enforce education emergency.It is need of time.Otherwise our golden future will be ruined.